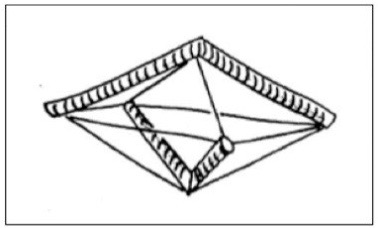 A basic cell from a tensegrity mast shown here illustrates the principle of how two solids (compressive elements) are stacked on top of each other and held in place by tensional elements.

From D.L. Robbie, MD., “Tensional Forces in the Human Body”

This chapter seeks to understand whether a particular configuration of body support might contribute to the definition of “internal energy.” The system of support under consideration is known as tensegrity, a term invented by the famous architect Buckminster Fuller (Photo 11-20) to describe how certain structures bear weight. A tensegruous structure, like the one illustrated in Diagram 11-21, bears weight through a configuration that alternates tensional (flexible) with strut (compressive) elements.

In this chapter, we apply some of the principles of tensegrity to an analysis of the structural support system of the human body; an example being the way normally unconscious muscles can be consciously triggered to improve athletic performance. Other aspects are speculative, such as the theory that the acupuncture meridian system, when tensegruous, promotes a more balanced bio-electrical field and thus produces less “noise.” * In this way, the structure, like the configuration of an antenna network, creates a more efficient arrangement and results in enhanced performance.

Applied to the human body, tensegrity defines the optimal biophysical system as interconnected, springy, and resilient. Within the human frame, tensegrity consists of a mix of tensional elements such as fascia, ligaments, and tendons, as well as compressive elements of the bones that act as “struts.” When tensegruous, the structure’s response can be compared to the flexible recovery of a palm tree under the force of wind.