The Power of Entrainment - Coherence

I was a senior martial art instructor. I knew how to take care of myself. However, what I touched in that moment blew everything up.  That experience forever changed my personal training. My meditation and qigong practice also changed. How I taught my students changed as well. 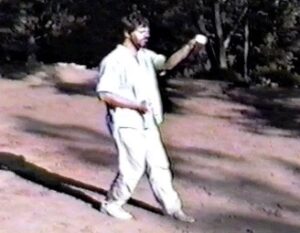 Purposefully working with, and learning to harmonize, my body rhythms was the single most important discovery of my martial art career.

The first time that I purposefully ordered my body’s rhythms was in the very late 1990s. The realization, my “transformation,” took place near the back of my martial arts studio. I was working on some “standing meditation.” I focused on a new way of practice that involved paying attention to extremely subtle body sensations. At first, I didn’t notice anything particularly impressive and my practice seemed to be Okay.  A few clues suggested that something extraordinary was about to happen — but I nearly missed them. In fact, I almost missed the entire “lesson,” due to the degree of those subtleties.

The lesson was triggered by a small, unimportant event. One of our school’s instructors came by and I attacked him.  It wasn’t a serious attack. It was one of those surprise and friendly challenges that we senior members frequently used among ourselves to keep each other on our toes.  But, this time, something was different.

The instructor I challenged was quite advanced and, normally, I could count on him for a challenge.  However, the battle I was expecting never materialized. Astonishingly, during that encounter, every strike I threw hit its mark. My opponent was unable to deflect any of my attacks. After a few moments, I stopped our match and asked,

“Why aren’t you working harder to defend yourself?”

Reflecting on the magic of that moment, and fine tuning it further over the years that followed, I realized that the mock battle marked the first time I purposefully entered a special mind-body state.  On that day I was initiated into a life-changing path. The new path required me to prioritize my awareness of biological oscillators (body rhythms) such as breath, feeling the heartbeat and pulse and paying attention to those rhythms that can be fine tuned to allow someone to attain a state of synchrony.

The premise of this chapter is that a special mind-body state called entrainment constitutes the cornerstone of the special abilities described by t’ai-chi pioneers. Entrainment is not synonymous with biofeedback, but biofeedback can induce entrainment.

Entrainment occurs when a person’s biological oscillators –- another term for “body rhythms” –- become harmonious, or “in phase,” as the term applies to a special kind of synchrony between one’s natural bodily rhythms. There are a number of body rhythms, and some, such as breathing, are easily observed. Others, such as a measure of stress vs. non-stress management of the heart known as heart rate variability, or HRV, are extremely subtle, and thus require laboratory instruments to reliably measure. Another example of a physiological oscillator is the profusion of blood through arterial vessels, a measure referred to as pulse transit time, or PTT.

Upon attaining this special kind of harmony between biological rhythms, a martial arts practitioner (or other athlete) becomes more efficient. Later, it will be described how some of my martial arts students and I tested entrainment in mock combat. The results that we observed through our informal research suggest that this bio-rhythm harmonic state allows an individual with at least moderate skill to prevail against an opponent in an exceptionally efficient, often expert way, as if the former had studied a decade, or more, longer.

If this observation is supported by further research and experimentation, it is revolutionary for two reasons. First, because of the way that the mind-body state, when linked with physical skill, defines the abilities of the top athletes, and second, because it functions as the long sought-after secret of advanced performance, allowing medium and high-level athletes to quickly advance to world-class status in their respective endeavors. In short, it becomes a state of internal harmony that allows a person with only a modicum of skill to perform in a masterful way. A video demonstration of the principle, applied to mock combat practice, can be viewed from the link shown in Box 7-5.