Critical Decision No. 1: What you believe shapes your training & Development 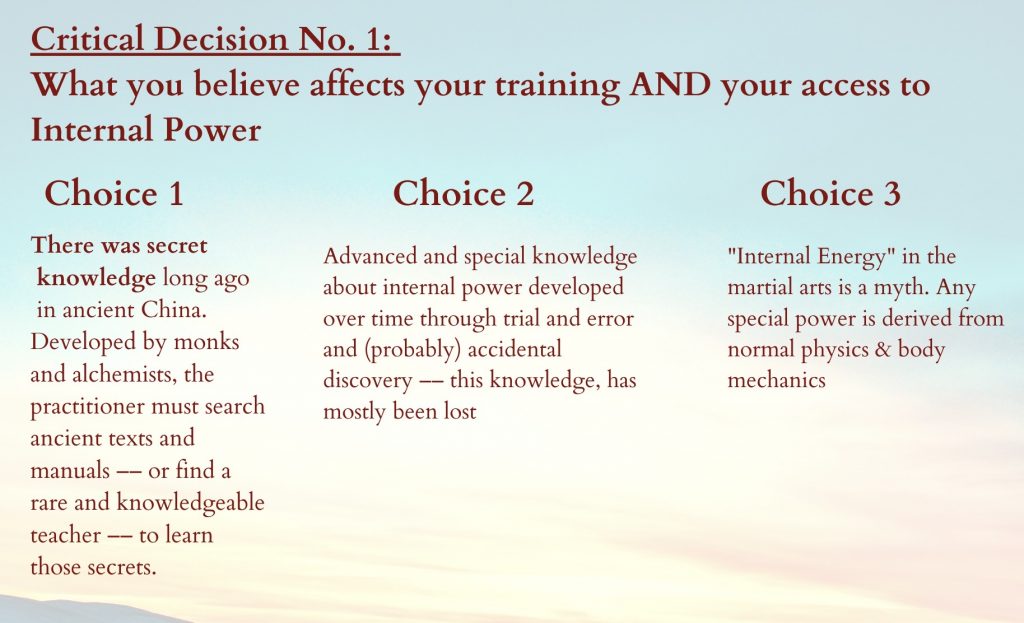 If you believe that there once –– in China’s distant past –– a special kind of knowledge existed about how to master one’s Ch’i / Qi / Life force, then you must wait (or search out) a master who has access to that special knowledge.

In much the same way that a magical character named Zhang is said to have been the originator of t’ai-chi, the legend of the Wudang (Wu Tang) monastery being the birthplace of internal martial arts also captures the imagination. The source of this legend
is no doubt the fertile imaginations of the writers of Chinese books, such as Huang Zongxi in 1669, followed by the filmmakers and comic book publishers of the twentieth century. These sources elucidate the mountain monastery as the place where, for
hundreds of years, monks trained in a style of “soft” martial arts, as a kind of yin–yang counterpoint to the “hard” combat skills of the famed Shaolin monastery.

— From The Search for Mind-Body Energy: Meditation, Medicine & Martial Arts

Our position:  It is a traditional Chinese belief (and by extension, the belief of many internal martial artists) that a special secretive knowledge once existed.  For the IMA, this knowledge is often said to have been transmitted by the alchemist Zhang Sanfeng (Chang San-fang) (depending on the source, in the 12th, 13th or 14th century)..Read more about Choice No. 1 and how this choice affects the practitioner

The third choice views “internal power” and special abilities in the IMA as myth. That way of thinking, if habitual, can have a devastating impact on the psyche –– and access to “internal power” of the individual.

First, it turns off the individual’s inherent genius.  (If “internal power” doesn’t exist, there’s no use searching for it, right?) Second, the attitude creates a psychological block to one’s ability to access special knowledge –– just in case it really does exist. This is so, since the need to defend (or continually restate one’s belief) means that –– on a very deep level –– the practitioner is not open to discovering “secrets” of internal energy and internal power.

Advanced and Special Knowledge developed over time through trial and error and (probably) through accidental discovery.

A practitioner who thinks about IMA and special powers associated with these arts as ongoing and progressive invites his/her brain to participate in the search for the ultimate secrets as an ONGOING process. That belief sees the ultimate secrets of the IMA as discoverable, but not yet having been fully discovered. This viewpoint minimizes the importance of “special knowledge” that may have once existed in favor of an ongoing evolutionary approach that gradually moves toward ultimate knowledge.

When one approaches the study of special abilities in IMA in this way it promotes neuro-chemical tracks to be laid down within the practitioner that rewards new ever increasing new connections and insights. This viewpoint sees current practitioners as participatory since it promotes / invites creativity and original thinking as problem solving tools.

In contrast to knowledge that might have suddenly appeared from a pristine source (e.g., a mountain dwelling recluse who lived hundreds or thousands of years before), this way of thinking about “internal energy” and “internal power” invites the IMA practitioner to also become a great master.

** Start your training to true mastery **