Who will benefit from the pages that follow (and who won't)

Some of the material that follows will be controversial.

It is intended for Master Level or experts in Ba Gua (baguazhang/ pa-kua chang) and/or the internal martial arts (neijiajuan).  Not everyone will benefit, and the material is not for everyone.

Note: the next page is free / later pages may require that you have an account with us and log in to our website. There may be a fee for some of the later material

(See the “The Whys” for these points, below)

Who will not benefit:

The belief that “intention” can produce a measurable physical influence

One of the concepts covered in the pages that follow is that “mind” and “intention” produce a measurable effect on the physical world. Thus, the cornerstone of many of these “Master Level pages” that follow is how to enhance that ability, for example, through specific hand and body positions or breathing practices during practice.  An important criterion at the mastery level, is that the mind and intention can influence the nervous system, and these extend a subtle influence against an opponent when matched with proper technique (this is not the same as throwing someone across the room without physical touch, a point that will be addressed later.)  The pages that follow will discuss how to understand and practice these for oneself. 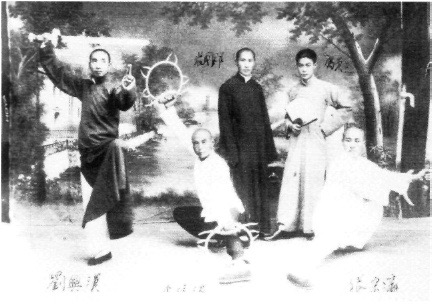 The benefit of time in prayer/ meditation / mind-body integration practice

Another cornerstone of the discussions that follow is that Ba Gua and the internal martial arts are more effective when a person’s biorhythms (for example, breathing and pulse with other rhythms) become synchronized. (With rare exceptions) it is not believed possible for an individual to learn to willfully harmonize one’s biorhythms without having a regular meditative or spiritual practice.

Openness to new ideas.  It is a waste of time to attempt to present new and unfamiliar (and especially challenging) training models to someone who is not open minded.

On “kindness.” Later we will cover the scientific literature that supports the notion that a mean-spirited person will not be able to produce the mind-body unity for “advanced physical expressions” associated with “mastery.”  Likewise, “hate” is destructive for the individual (the “hater”), and must be avoided at all costs.

Re. those who cannot deal with the possibility of changing; no explanation needed 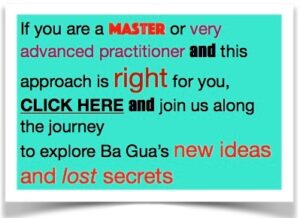 * Here, internal martial arts (neijiaquan) are defined the mind-body yogic systems as described by Sun Lu-tang in his books published in the 1920s and that, for the most part, were espoused by specific martial art groups who practiced and developed their arts on China’s north-central plain circa late 1800s. These are proposed to be a special class of evolved “yogic-energy” arts that presented an unusual study and path to mastery. The path was one that combined Qi/ch’i* intention, principles of Taoist yoga and specific mind-body training regimens to form a new kind of “martial art study.”  It is highly recommended that every serious internal martial artist, whether they agree or not, be familiar with this theory of “Qi” in the martial arts. See John Bracy’s The Search for Mind Body Energy: Meditation, Medicine & Martial Arts.  Relevant excerpts are also available in a PDF available for sale on this website  LINK )