Box 12-19 Another Explanation for "Internal Energy?"

The use of "Magnetic Fields" and "Disruptive Information" against an Opponent

Inner and Outer Expressions of the Mind-Body Magnetic Fields

Warning: The examples provided in this section are extremely dangerous and can result in serious injury to the practitioner. The principles discussed and demonstrated here are performed by a highly trained expert; they are presented for research and discussion purposes only. Do not attempt these demonstrations without many years of training and guidance by a qualified expert. 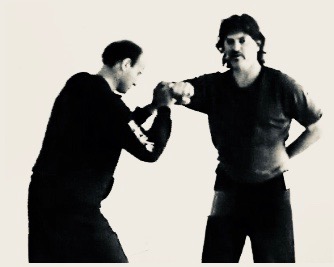 This is the strangest of the “strange explorations,” and the most difficult to describe. I had mixed feelings about whether to include this material in the present work, because I do not completely understand it myself. Thus, the following discussion includes some guesswork regarding what I believe takes place in this category of advanced practice, and combines elements from Sections III, IV, and VIII. Material from Section III involves the practitioner’s sense of electrical and electrical-like sensations within their body, while material expanded from Sections IV and VIII relates to the practitioner’s conscious extension of disruptive information.

The basis of the model is the notion that, at advanced levels, a practitioner can generate and control sensations within the body that appear as electromagnetic or electromagnetic-like. As will be described in a moment, when “externalized” against an opponent, they allow the transfer of disruptive information.

Section VIII included discussion of how neutralization of an opponent’s force might be explainable not in terms of the skilled practitioner’s ability to transmit a willfully directed force per se, but rather as the ability to transmit disruptive information. It also considers how information, acting through the medium of an extremely subtle (EM + EM-like) influence, could enhance an expert martial artist’s skill through disruptive information that can destabilize and / or weaken the opponent. Taken together, the model proposes to explain how what appears as only a minute amount of force or contact against an opponent can still be effective in close combat.

Please note carefully the advisory message that precedes this strange exploration. The examples and demonstrations included here are for research and discussion purposes only. They are very advanced and dangerous and should not be attempted by anyone who has not been properly prepared over many years and supervised by a qualified master.

To present a demonstration of the kind shown in Photo 12-18, and viewable through the video link included in Box 12-19, the performer must accomplish several steps in quick succession. First, the practitioner attains the requisite mental state. Second, he becomes sensitive to, induces, and begins working with the body’s lower abdominal energy fields. Third, the practitioner must intend the body’s “energy fields” to interact with the opponent. The resulting experience can be very intense, and what follows is my interpretation of these strange and, at times, unsettling experiences.

As previously noted, an important part of the experience relates to the practitioner being able to attend to sensations in the lower abdomen. These feelings may initially appear as warmth, either with or without pressure. However, at more advanced levels, they will appear as the play of magnetic fields within the lower abdomen.

At advanced levels of practice, the practitioner will experience sensations that feel like moving electromagnetic forces in the lower abdomen, and my interpretation of these is that the energy vortexes of the lower abdomen have become very dynamic. In the accompanying video of the demonstrations, accessible via the link in Box 12-19, I refer to these sensations as “the floating dan tian.” [i]

When applying the energy fields against an opponent, the most conspicuous experience for the practitioner is that of effortlessness. Performed correctly, it seems that regardless of how much physical force the attacker applies, in the practitioner’s experience, the encounter involves no more than the most minimal pressure being placed against their body. An experience like this seems to defy normally accepted rules of force and mechanics, and thus, is difficult to put into words. My interpretation of the phenomenon is that when it is applied against an opponent, some unknown influence –- presumably information –- interrupts the opponent’s ability to use his strength and body mechanics effectively. When performing these demonstrations against assistants, I felt only the most minimal physical force on my body. The experience was simultaneously strange and fascinating (examples of this kind are presented in Photos 12-18 and 12-20, and a video of the demonstration can be viewed from the link provided in Box 12-19).

[i] The dan tian was described in earlier chapters as the “energy center” of the lower abdomen associated with Taoist yoga, t’ai-chi, and other schools of internal martial arts and meditation.

When performed correctly against an opponent, the lightest contact appears to interrupt and weaken their physical integrity. I’ve applied the principle during many demonstrations, and on a few occasions, actual close combat. When applied against an adversary attempting to move or push me, although there is only the sense of minimal, if any, force on my body, other cues act as guides that tell me I’m performing the technique properly. Prominent among these are strange sensations within the body, the most noticeable being the heightened sense of moving and swirling magnetic field vortexes within the lower abdomen.

"Disruptive energy and the use of Magnetic Fields against an Opponent"